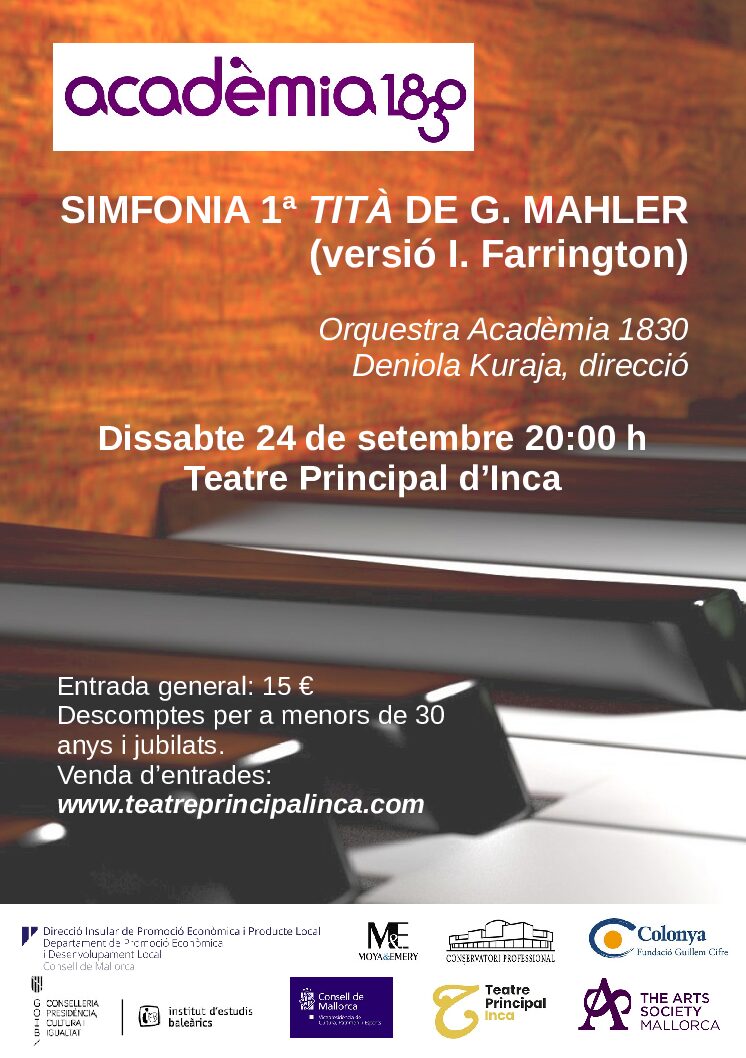 The next Classical Festival concert will be on September 24 at the Teatre Principal at the village of Inca. We present the First Titan symphony by G. Mahler in the version by I. Farrington.

Discounts for under 30s and retirees

Deniola Kuraja was born in the city of Durres. At the age of 6, she took her first piano lessons at the music school “Jan Kukuzeli” Durres with teacher Irma Picari. She had her first public appearance at an early age, continuing later in a series of recital concerts and many other artistic activities organised by cultural institutions.

Until 1999 Deniola studied at the Academy of Fine Arts in Tirana in the class of Prof. Anita Tartari, where she also graduated. Deniola has covered a wide range of musical activities, as a soloist she has performed with the National Opera of Albania, the Radio Television Orchestra of Albania and the Academy of Fine Arts in Tirana under the direction of conductors such as; Rifat Teqja, Zhani Ciko and Alqi Lepuri.

She is the winner of several national awards, including the first prize in the piano competition “Young Pianist”, twice winner of the third prize in the national competition “Tonin Harapi” and “Cesk Zadeja”, also awarded a Diploma in the competition “Nikola Zoraqi “. She received important musical impulses and development between 1993-2001 from Till Engel (Essen), Gerard Fremy (Paris), Anna Maria Stainczyk (Warschau), Michele Campanella (Siena) and Manon-Liu Winter (Wien). She is one of the scholarship holders of the “ Italian Cultural Institute”, which made it possible for her to participate in a two-month Master Course at the Conservatorio di Musica N. Piccini in Bari.

The levels of professional experience between the years 1999-2007 were favoured through artistic engagements in various Albanian cultural institutions and beyond: it is worth mentioning especially the work as a piano accompanist in the class of flute, violin and clarinet at the Academy of Arts in Tirana, then since 2001 she has been engaged as a piano accompanist/repetiteur at the National Opera of Albania where she would start getting first impulses about conducting. At the end of 2007 follows another commitment on a project of the German opera “Der Zwerg” by Alexander Zemlinsky developed at the Macedonian Opera and Ballet Theater in Skopje.

In 2008 while working as piano accompanist/repetiteur at the University of Music, Theatre and Media in Hanover, Deniola wanted in order to deepen her experiences in conducting, she began to study conducting in the class of Prof. Eiji Oue and in 2010 in the class of Prof. Martin Brauß. She completed her studies by conducting the Musical “Street Scene” by Kurt Weill with the Hannover University of Music, Theatre and Media.